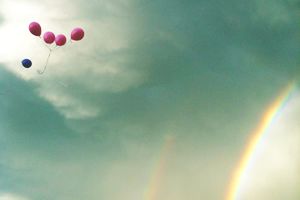 Finding peace in honoring our daughter.

I love hearing the stories behind the names that we each have chosen for our sweet babies. I am often struck at how much time and care is taken to choose just the right name for any child, although for some it seems to take on greater significance when you learn that your child will not have a lifetime with their name.

Several years ago I had a discussion with others after one parent shared their thought of not “wasting’ this special name that meant so much to the family on a baby who would die. It is such a difficult situation.

I remember myself being shocked at first at how honest a thing that was to share. I was also taken aback a little, as if the act of sharing this thought aloud somehow translated into cheating my child out of something. I remember feeling ashamed to admit that I felt the very same thing. I too had those secret thoughts about giving our baby girl the name Rowan. I had wanted that name for my daughter for as far back as I could remember; before I ever met my husband.

For me it was a beautiful and unique name, especially at that time in the United States, where it was just not as popular as in other countries. Ultimately for us, there was hardly any wavering when naming her. I felt it would be unfair to deprive her of something that meant so much to us, and we named her the moment she arrived. We didn’t know she was a girl, or about her diagnosis – but we knew something would be wrong on the day that she was born.

I remember when we were filling out the “official” birth forms for social security and such after she was born and it was then that these little thoughts crept into my mind again. Maybe we could save this name for another child. Maybe… I don’t regret having my “chosen” name being given to someone who lived only a day… of course I wanted so much to have her live a long life with her beautiful name. I imagined her with auburn hair telling everyone that her name means “little redhead” in the old Irish. I thought it would be a strong name for a woman to have, most likely not shortened by a nickname as she grew up.

In retrospect, I do feel that I have honored her by giving her the name we had chosen. I can say now, that if we had given her another name, I would have felt we had in some way devalued and disrespected her. The beautiful daughter that has arrived after her could never have been named Rowan. Today I can look back and truly say it is an honor to have my firstborn bear the name that I had dreamed about giving a child for so long. And the irony, I guess, is that she does have her name for a lifetime, it just is not only her lifetime – but ours.

Her name is part of the legacy that is my family, and hopefully I can instill in everyone how wonderful it is to continue to talk openly about Rowan, so that we may never forget her. My daughter would be turning 6 at the time of this writing. I have found joy in hearing her name still spoken in our home and among our friends, and more recently among her younger siblings. For me, her name is so very special, probably even more so now because hearing it spoken proves her spirit and her memory are alive in us.