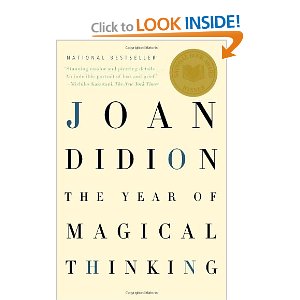 “Life changes fast. Life changes in the instant. You sit down to dinner and life as you know it ends.”

On December 30, 2003, Joan Didion and her husband John Gregory Dunne arrived home from the hospital where they were visiting their daughter. In her mid-30’s, their daughter Quintana was admitted to the hospital with a “flu” that eventually grew into pneumonia, and ultimately, into complete septic shock.

Sitting down to dinner in front of the fire, Joan Didion notices that her husband has stopped talking. She looks across the table to find him slumped slightly. At first she thinks he is playing a joke, but having suffered a massive coronary in his chair by the fire, John Gregory Dunne is dead.

What follows is a portrait of one woman’s grief and mourning that is complicated by the fact that his death occurs in the midst of her daughter’s grave illness. Quintana recovers slowly from the sepsis, only to find herself in six hours of emergency neurosurgery to fix the damage caused by a massive hematoma.

“Grief happened” Didion says, it is the mourning that had yet to come.

In the year that follows her husband’s death, we accompany Joan Didion on her journey into the past. Teasing apart the details of a forty year marriage, setting everything against the backdrop of with whom and when and where they were. Joan Didion begins to question the most mundane facts and starts to see things as premonitory, wondering if there had been some way she could have prevented what happened. Wondering if her husband knew that he was to die when he did, in the way that he did. At one point, we witness her notion that she has been living this year against last year’s calendar.

I found this such a poignant yet simple description of how we cling to the time before our loved one died as if we can keep reality from seeping in; existing physically in the present moment while our mind is stuck remembering and replaying this date in the past that we spent with the one who died. This book is a must-read for anyone that has lost someone close to them. The Year of Magical Thinking gives us a very personal look at the life and the relationships of Joan Didion, and how losing her husband changed everything. This book also expresses the universality of grief and loss, and the truth that even though we all grieve as individuals – there are threads of grief that bind us all.