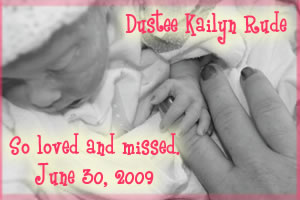 I had a uterine ablation less than a year before becoming pregnant and I was taken off my birth control after the procedure and was told it was not necessary. As it turns out…7 months later I became pregnant.

It was not expected to be a healthy pregnancy but ended up without any problems throughout. I did not know I was pregnant for the first 12 weeks. Once I figured it out and started the prenatal care, I was warned of the risks…which pertained mostly to me.  I was told I should terminate the pregnancy for my own safety, which was not an option in my eyes.

I continued and everything was perfect until my 33rd week when I went to bed on the night of June 28th and fell asleep without feeling my precious miracle move. I woke up with my husband when he was to leave for work, and still didn’t feel her. Tried several things to get her to move but it was already too late. She was gone, and probably had been for hours by this time.

I was induced on the 29th, and the morning of the 30th still had not progressed. I decided that instead of laying in a bed for another day, in labor, to deliver my stillborn baby, was just too hard for me…so I opted for a c-section…which then turned into a hysterectomy.

There were no clues to why my baby died in utero. The best guess the Dr. had was that it may have been a cord accident. This has been especially hard for my family considering my youngest of 3 children is 10 years old.

I can’t say anyone in my household was overly excited in the beginning, other than my husband…but we all came to love the idea of having a baby in the house. Then to have our faith tested in such a horrible way, is tough for any of us to swallow. We had a beautiful graveside service for her and the community in which where I live was absolutely wonderful.

I can’t describe the pain I feel, I just know it is worse than any ever. I feel cheated, and I definitely feel she was cheated. She is so loved and missed by everyone, and we never got to even hear her cry.

Your Child’s Page is a free program of Rowan Tree Foundation.
See a list of the pages already created.