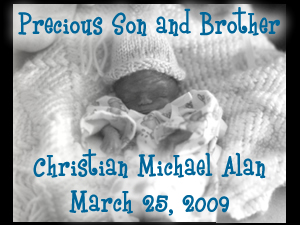 This is my son Christian Michael Alan’s Birth Story.

It started on November 22, 2009 when I took a pregnancy test and the test came out positive. I was scared but excited at the same time so I accepted it and prepared to have another baby. Around my 12th week I started bleeding so I went to the emergency room and they told me that I had a hemorrhage and that they weren’t sure if I was going to have a miscarriage or not. But, as time went on I just kept bleeding through the days.

At 18 weeks I had to be rushed to the hospital because I was losing a lot of blood but I was also losing fluid according to my doctor. Well, the doctor had me believing that I was going to have the baby that night, so they gave me some morphine and then after a few hours they gave me an ultrasound to see how much fluid was left in the womb. Well I never lost any fluid. All the fluid that was supposed to be there was there. So the doctor sent me home saying that I should let mother nature do its thing. So I did and things were okay for about 3 days.

Then I got a letter saying that my son might have down syndrome. So we went to the doctor’s to discuss what was going on and then they did an ultrasound to rule out the down syndrome for sure. So the test came out negative we were so happy. They also told me at my 12 week checkup that I could have been pregnant with twins, that could be why I have a hemorrhage.

Things were fine until the 25th of March. I had to go the emergency room because I was having contractions. Well sure enough, I was and there was nothing they could do. I was already 3 centimeters dilated. The next time the doctor checked me I was 6 centimeters and I was in so much pain. It hurt so badly they gave me everything they could to ease the pain but nothing worked. The worst pain I had ever felt.

Christian was born at 6:51 AM and he only lived for 1 hour and 17 minutes… I didn’t know how to feel so I didn’t hold him. I fell asleep from all the drugs they gave me. So I didn’t get to hold him when he was alive. I held him after he died. He was so tiny and so perfect. He had all his parts that he needed, he was just born too early, there was no way he could have survived. He was cremated on March 30th and I picked him up on April 5, 2009.

I am blessed to have my 5 children but losing Christian was very hard and I think about him every day. There is not a day that goes by that I am not thinking of him…

Your Child’s Page is a free program of Rowan Tree Foundation.
See a list of the pages already created.